This is a short follow up post to one I did a couple of years ago, on "Exogenous risk management". This was quite an interesting post which dug into why expected risk changes for a typical diversified futures trading system. And then I introduced my risk overlay:

"Now we have a better understanding of what is driving our expected risk, it's time to introduce the risk overlay. The risk overlay calculates a risk position multiplier, which is between 0 and 1. When this multiplier is one we make no changes to the positions calculated by our system. If it was 0.5, then we'd reduce our positions by half. And so on.

So the overlay acts across the entire portfolio, reducing risk proportionally on all positions at the same time.
The risk overlay has three components, designed to deal with the following issues:
- Expected risk that is too high
- Weird correlation shocks combined with extreme positions
- Jumpy volatility (non stationary and non Gaussian vol)
Each component calculates it's own risk multipler, and then we take the lowest (most conservative) value.
That's it. I could easily make this a lot more complicated, but I wanted to keep the overlay pretty simple. It's also easy to apply this overlay to other strategies, as long as you know your portfolio weights and can estimate a covariance matrix "

Since I wrote that post, I've radically changed the way my trading strategy is designed. This is discussed at length here. Here are some relevant highlights

Basically I did a lot of stuff, but along the way I lost my risk overlay. But like I said above, I planned to reintroduce it once the dust had settled. Can you hear that noise? That's sound the sound of dust settling. Also note that I introduced a new method for estimating vol. That will be important later.

There will be some very specific references to my open source trading system pysystemtrade, but the vast majority of this post should be of general interest to most people who are interested in risk management.

Where should the risk overlay go?

On reflection I decided not to put the overlay into the dynamic optimisation. You can imagine how this would have worked; we would have added the risk limits as additional constraints on our optimisation, rather than just multipling every positions by some factor betwen 0 and 1. It's a nice idea, and if I was doing a full blown optimisation it would make sense. But I'm using a 'greedy algo' for my optimisation, which doesn't exhaustively search the available space. That makes it unsuitable for risk based constraints.

I also decided not to put the overlay into a downstream process. This was for a couple of reasons. Firstly, in production trading the dynamic optimisation is done seperately from the backtest, using the actual live production database to source current positions and position constraint + trade/no-trade information. I don't really want to add yet more logic to the post backtest trade generation process. Secondly - and more seriously - having gone to a lot of effort to get the optimal integer positions, applying a multiplier to these would most probably result in a lot of rounding going on, and the resulting set of contract positions would be far from optimal.

This leaves us with an upstream process; something that will change the value of system.portfolio.get_notional_positions(instrument_code) - my optimal unrounded positions.

What risks am I concerned about?

Rather than just do a wholesale implementation of the old risk overlay, I thought it would be worthwhile considering from scratch what risks I am concerned about, and whether the original approach is the best way to avoid them.

Here is what I decided to go with:

Hence we have the following risk control measures:

Firstly, we only select instruments to trade that have some minimum standard deviation.

It can be shown (see my forthcoming book for proof!) that there is a lower limit on the instrument risk (s), given a maximum resulting leverage ratio (size of notional position in that instrument divided by total capital) L, instrument weight w, annualised risk target (t), and instrument diversification multiplier (IDM). Assuming the ratio of maximum forecast to average forecast is 2:

That's pretty low, but it would sweep up some short duration bonds. Here's the safest instruments in my data set right now:

It looks like those marked with * ought to be excluded from trading. Incidentally, the Shatz and JGB mini are already excluded on the grounds of costs.

This will affect the main backtest, since we'll eithier remove such instruments entirely, or - more likely - mark them as 'bad markets' which means I come up with optimal positions for them, but then don't actually allow the dynamic optimisation to utilise them.

Note that it's still possible for instruments to exceed the leverage limit, but this is dealt with by the off line hard position limits. Again, from my forthcoming book:

Suppose for example we have capital of $100,000; and a notional exposure per contract of $10,000. We don’t want a leverage ratio above 1. This implies that our maximum position limit would be 10 contracts.

We can check this is consistent with the minimum percentage risk imposed in the example above with a 1% instrument weight, IDM of 2.5, and 25% risk target. The number of contracts we would hold if volatility was 1.25% would be (again, formula from my latest book although hopefully familar):

(Notional exposure per contract  × s%, i)

Because the limits depend on the notional size of each contract they ought to be updated regularly. I have code that calculates them automatically, and sets them in my database. The limits are used in the dynamic optimisation; plus I have other code that ensures they aren't exceeded by blocking trades which would otherwise cause positions to increase.

Note: These limits are not included in the main backtest code, and only affect production positions. It's possible in theory to test the effect of imposing these constraints in a backtest, but we'd need to allow these to be historically scaled. This isn't impossible, but it's a lot of code to write for little benefit.

Once we've decided what to measure, we need to measure it, before we decide what limits to impose.

In my original post I noted that a way to set these limits without getting tempted to fit them, was to set them at some percentile of the distribution of each risk measure. I'm going to use the 99% percentile - the risk overlay is designed to kick in occasionally, not every other day.
I ran my full trading system (discussed here) to generate these plots; but as noted above the positions used for these calculations were unrounded positions before dynamic optimisation.
Let's start with 'normal' risk 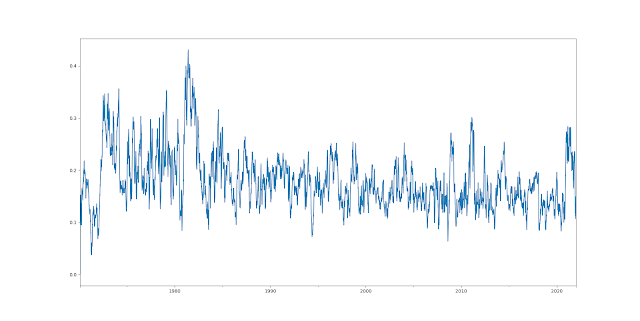 Median: 16.9%
99% percentile: 34.9%
Notice we undershoot our risk target- 25% - and this is most likely because the IDM is capped at 2.5; so has more instruments are added we can't leverage up as much as is theoretically required.
It seems reasonable to cap this at 50% - twice the annual risk target - since we can take on positions that are twice as big than the average, if the forecast is large enough. And indeed that's what I did in the previous iteration of my risk overlay. However this would require all of our instruments to hit double forecast at the same time: unlikely! So let's stick with the 99% percentile approach and set this to 34.9/25 = 1.4 times the long run risk target. This wouldn't have been triggered in a backtest since the early 1980s.
It's quite interesting to also plot the realised risk: 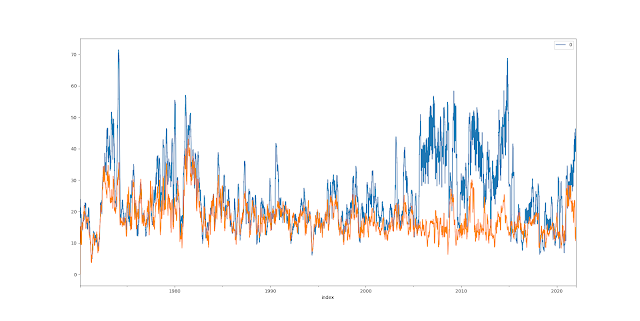 Here the expected risk is in orange, and the realised risk over the last 6 months is in blue. You can see that they follow each other to an extent, but we clearly realise more risk especially in the period after 2005. The median of the realised risk is much closer to target: 27%. Anyway, that's nothing to do with this post....
Now for the 'jump' risk 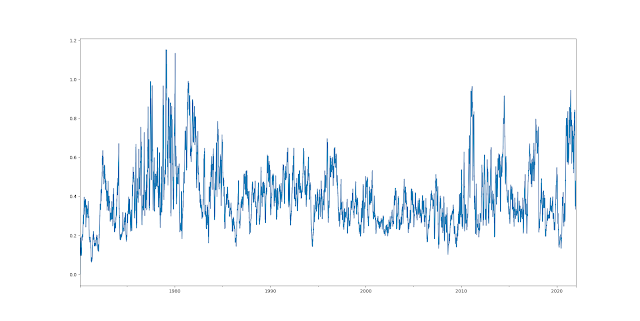 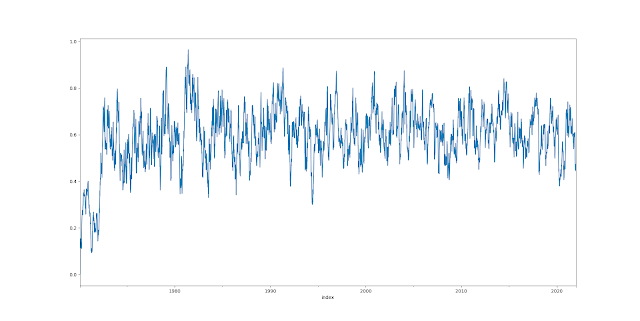 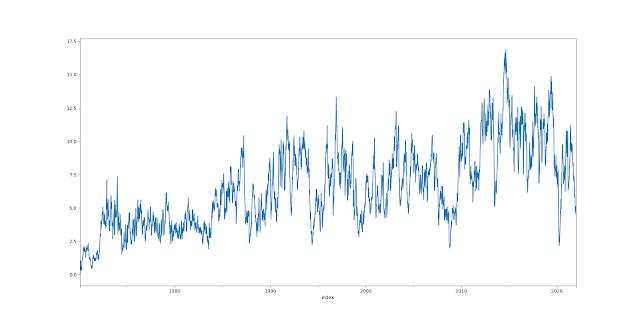 Remember the units here aren't % annualised risk, they are a ratio to capital.
Median 6.15
99% percentile: 13.9
This is a tricky one, and if you're going to use this approach I would advise checking for yourself since the leverage will depend very much on the mixture of instruments you have. The leverage has clearly grown over time as more instruments have been added with lower risk. On the face of it, 13.9 times leverage sounds pretty flipping scary.
But remember that the use of position limits in production, and the avoidance of instruments with very low risk, will probably mean the real leverage isn't as bad as all this. For example, the leverage I have on at this very moment with my actual production positions after dynamic optimisation is just 1.6 times.
Anyway we have to use a number, so let's be a tiny bit more conservative than 99% percentile and go for lucky 13.
Here's the limits in the configuration in case you want to change them:
Now, for each of the risk measures I calculate the following scalar: Min(1, Limit / Risk measure).
That will be equal to 1 most of the time, and lower than 1 if the risk measure has exceeded the limit. We'd then take the minimum value of these four ratios. Notice that different risk ratios are kicking in at different times, as different risk measures become problematic.
The longest period the risk overlay is turned on is for about 6 months in late 2014. Mostly though it just kicks in for a few days. The minimum value is 0.77; so we'd reduced our position by almost a quarter. The overlay is on about 4% of time; this feels about right given we have four risk measures kicking in 1% of the time, so that's what we'd expect if they were uncorrelated.
Finally I multiply the unrounded positions (pre dynamic optimisation) by this risk scaler value.
There will be additional trading costs from implementing this; if I wasn't using the dynamic optimisation that provides a buffering service, I'd probably think about smoothing the risk overlay a little bit to reduce those costs.
I won't be bothering to test the effect of running this risk overlay; it doesn't turn on enough to give meaningful results.