Well time flies. It's a year since I wrote this post:

... which means it's time I reviewed my second year of systematic futures trading.

Or to put it in the context of the full period:

So basically a 40% increase, on top of the 57% last year (I don't compound my returns). Unlike last year I didn't change my risk weighting.

As I've stated before the p&l in my account comes from two main sources; a hedged stock portfolio (you can think of this as a long:short equity hedge fund), and some futures trading.

The hedged equity portfolio made a lot more money than last year. It's important to bear this in mind when comparing against pure futures managers as I will do later on in the post.

My futures trading was still very good (a SR of just over 1.0; better than expected in the back test at around 0.88) though not as amazing as last years 57%.

Slippage was about half the level of the prior year; probably because my execution algo was doing a wonderful job for the whole year rather than just part of the year as before. I'll be analysing my execution costs in more detail in another post.

The back test doesn't include futures rolls; I can't be precise but eyeballing the data they account for around a third of commissions and a similar chunk of bid-ask so in reality I'm probably doing okay. This will be something I'll be implementing in my new system, pysystemtrade.


As I noted above it's probably unfair to compare my performance to a pure futures CTA like AHL, but for consistency I did it anyway. As with last year I used the AHL diversity GBP class as my benchmark. The correlation of monthly returns for the last 12 months was 0.80, a little lower than before, but still relatively high.

Because AHL runs at a lower vol than me to graph our returns I first need to adjust AHL's for this effect. This gives me the following cumulated returns for the two year period: 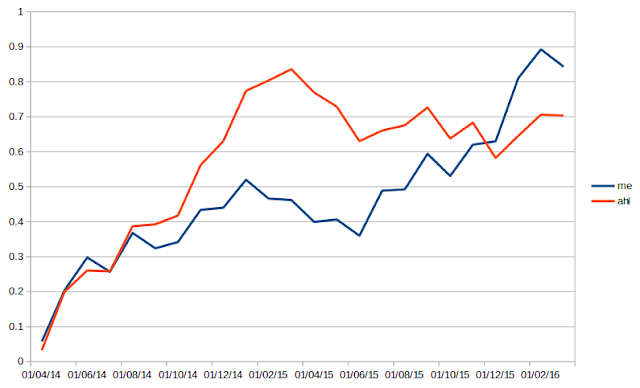 The Sharpe ratios for the last 12 months were 1.33 (me), -0.59 (AHL). If I take out the additional performance of equity neutral then my Sharpe is around 1.0. So just on pure futures trading I've still done much better this year. It isn't just AHL eithier. Of the big European CTA names only Aspect (+8%) and ISAM (+15%) made anything like a SR of 1.0 (Winton was up slightly).

I'd guess this is probably due to having more carry in my system (I underperformed in the first year, when pure trend following kicked butt). It could also be a lower allocation to under performing asset classes like equities (of which more in a second).

For the whole period the Sharpes are 1.65 (me) and 1.38 (AHL) respectively. Again without the equity neutral component we'd have very similar performance over the two years.

There is a longer discussion of the "big versus small" argument here.

The trend in all the precious metals (Gold, Platinum and Palladium) was strong, with Copper helping as well.

Let's look at Gold since most people know the chart: 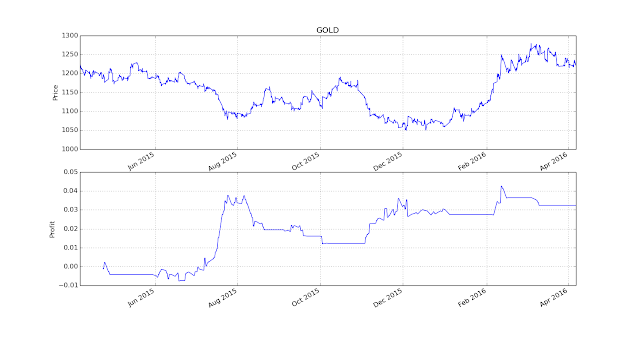 Not a single one off trend; rather two down trends and one up trend on which serious profit was made; interspersed with gradual leakage. Gold actually ended up the year unchanged (with rolldown included), yet we made money. Lovely.

Crude was a winner last year, but Gas actually contributed more this year: 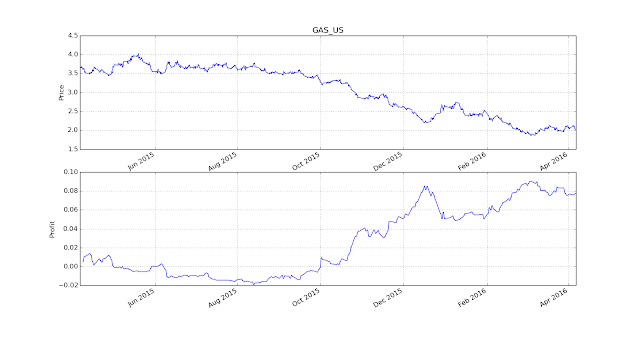 Although bonds didn't do very much, Eurodollar's (now the only market in the STIR asset class) were a stand out: 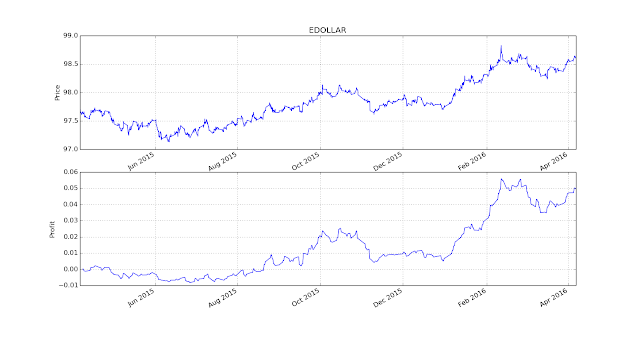 Despite Ms Yellen's best efforts the overall direction was up; and this basically translated into profits (though I was a little flatter in the trend less periods as you'd expect).

One of the worst markets was CAC; very typical of stock markets generally: 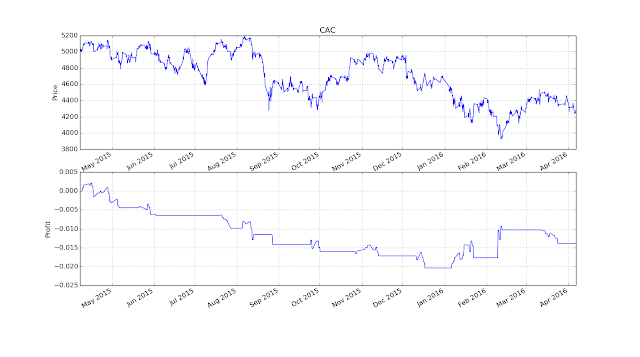 What an ugly chart. Most of the time there wasn't a trend strong enough to justify a position; then when one was put on it was immediately whipsawed out, resulting in gradual bleeding.

However cable IMM futures were the worst market of all 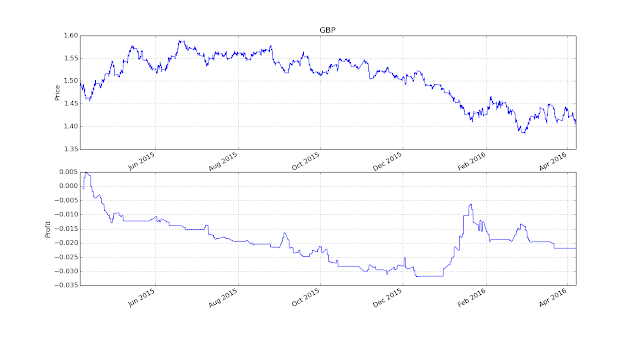 Almost a year of perfectly awful rangebound behaviour; with one decent trend saving my bacon a little.


As I have noted before, and will note again, and again, and again; even a few years worth of live trading performance may not tell you with much statistical significance whether you are good or just lucky (or both). I've definitely been lucky with my equity neutral strategy this year; whilst my futures trading is in line with expectations.

At best I can say it's becoming less likely that I'm doing something stupid and have just been lucky. So if markets continue to behave as they have for hundreds of years, then I should continue to make a little money.

If you're interested in building your own systematic trading engine, then have a look at my other blog posts on the subject, or of course you can also buy my book.
Posted by Rob Carver at 16:46 24 comments: