Over the last few posts I've been grappling with the difficulties of trading futures with a retail sized account. I've tried a couple of things so far - a complex dynamic optimisation (here and here) where I try and optimise the portfolio every day in the knowledge that I can only take integer positions, and then a simpler static approach where I try to pick the best fixed set of instruments to trade given my account size - and then trade them.

In this post I return to a dynamic approach (choosing the best positions to hold each day from a very large set of instruments), but this time I'm going to use much simpler heuristic methods. I use the term heuristic to mean something you could explain to an eldery relative: let's call them Auntie Barbara.

I used to have an Auntie Barbara, but she died a long time ago. If there is an afterlife, and if they have internet there, and if she subscribes to this blog: Hi! 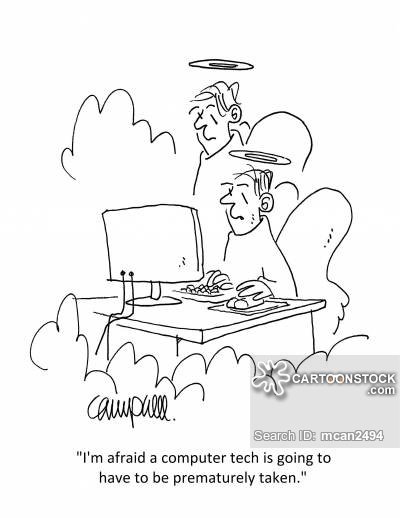 I've written this post to be fairly self contained (I can't really expect Auntie Barbara to read all the previous posts, she will be too busy playing tennis with Marilyn Monroe or something) and also a bit simpler than the previous three to follow.

Here's the setup again. I have a universe currently of 48 futures markets I'd like to trade (for now - in practice I'm adding new instruments every few days, and in an ideal world there are around 150  I'd like to trade if I could). If I backtest their performance it looks great (this is just with the set of trading rules in chapter 15 of my book, 3 EWMAC + carry; but I do allow the instrument weights to be optimised): 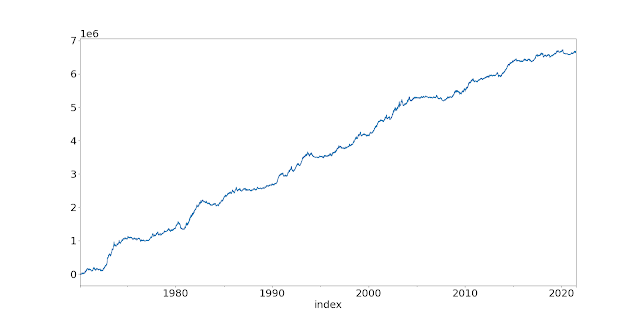 That's a Sharpe Ratio of 1.18, pretty good for two trading rules (ewmac and carry). Oh the power of diversification...

Not only does it make money, it also (on average) has good risk targeting. Here's the rolling annualised standard deviation (which come in at 22.2% on average, slightly under the target) 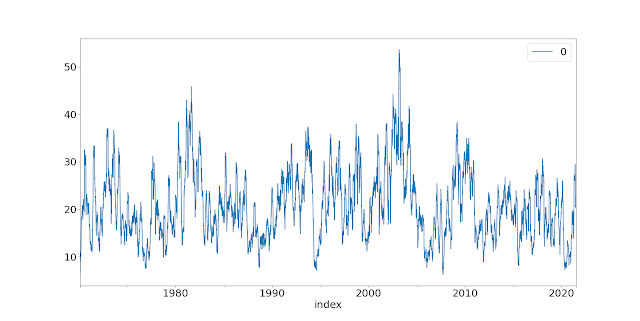 Auntie Barbara (AB): "Great! You always were a little smart alec. Can I get back to my jacuzzi now? I've got James Dean and Heath Ledger waiting for me."

* Auntie is communicating with me from the spirit world via telnet, hence the Courier typeface

Sorry Auntie, I cheated slightly there. That's the performance if I can take fractional futures positions, o equivalently what I could do with many millions of dollars.

This is what it looks like if I trade it with $100K (about £80K: this particular FX rate is roughly unchanged since my Auntie died)

I normally use $500K for these tests - but I'm trying to make the results starker.

AB "Why does it start going wrong, weirdly, not long after I've died? Are you saying this is my fault?"

Not at all! No, to begin with there are only a few instruments in the data. Then as more are added, we struggle to take positions in every instrument due to rounding. We end up with many instruments that have no position at all; the positions we end up making (or losing money) from just happen to be those with relatively small contract sizes.

So the portfolio becomes more concentrated, and in expectation (and also in reality here), has worse performance. It also undershoots it's risk due to all that 'wasted' capacity of the instruments which can't take a position. There are many instruments here that we are just collecting data for, but can't hope to ever take a position in. 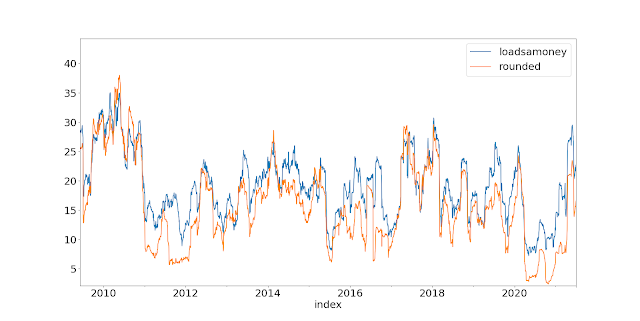 We're systematically undershooting, especially in more recent years when I have a lot more instruments in the dataset. The risk is also 'lumpier', reflecting the close to binary nature of the system.

AB "Hang on, I've just read your last couple of posts again. Or tried to. What happens if you do some kind of fancy dynamic optimisation on your positions each day?"

That doesn't work and is way too complicated.

AB "And what if you just select a group of markets and trade with those?"

Well if I use the 16 instruments I identified in my last post  as suitable for a $100K account I get these results: 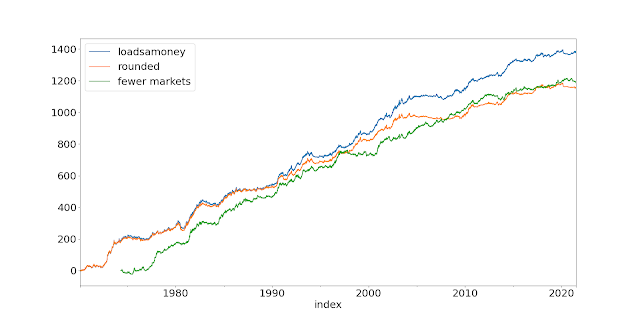 Fewer markets is handicapped by having later starting data, but if I account for that: 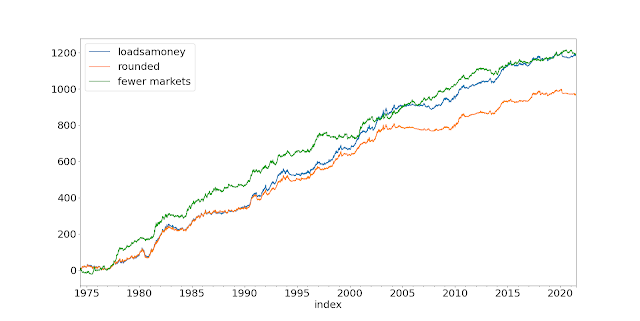 AB "When does that data start now?"

That feels slightly like cheating since they're identified using some forward looking information, but if I selected any 16 instruments on a rolling basis using any vaguely sensible methodology I'd expect on average to get similar results.

Basically we make up some of the ground on the full 40+ instrument portfolio compared to the rounded situation, but we never quite manage it (although the green curve looks as good, it's actually got a lower SR and underperforms in more recent years as we get more and more instruments in the full portfolio). In expectation 16 instruments, no matter how carefully chosen, will underperform 50; never mind 150.

AB "Well it's obvious what you should do"

AB "Do you remember when you were a boy, and you'd invite all your friends to your birthday parties?"

AB "Well just bear with me then. Suppose you had 50 friends, and you could only invite 16 to your party. What would you do?"

I'd.... well I'd pick my favourite 16 friends (this is hypothetical! What kind of person has fifty 'friends'?).

AB "Now suppose you had a birthday party every single day. What would happen?"

Well... I suppose I'd pick whoever was my favourite 16 friends on that day. But, with respect, what on earth, (sorry insensitive), what the hell (worse!),  what in heaven does this have this to do with the problem at hand.

AB "Hasn't the penny dropped yet? I thought you were a smart alec."

OK it has finally dropped. What I need to do is just hold positions in the 16 instruments that have the strongest absolute forecast on that day.

AB "Someone give the boy a medal"

I choose to ignore that. Let's see some code:
This code actually contains some future proofing, in that it is written for path dependence in positions - which we're not actually going to use yet.
Most of that should be self explanatory, the 'initial' position (perhaps badly named) is the position the system would want to take if we put all of our trading capital into that single instrument. We then scale that by a risk budget, which is equivalent to an 'instrument weight' that here is just 1/N (N is the number of assets we're currently trading), with a lower limit of 6.25% (to avoid having no more than 16 positions; this value can be tweaked depending on your capital), and an IDM calculated as N^0.35 (note if all subsystems had zero correlation this would be N^0.5, so this is a reasonable approximation), with my normal limit of IDM=2.5
Now a 'tradeable' instrument is one with a non na forecast, but also a position that is equal to a single contract or more. No point wasting risk capital on a position that isn't at least one contract.

AB "No point inviting a kid to the party who can't come. That's a waste of an invitation."

Indeed.
Let's have a gander at what this thing is doing: 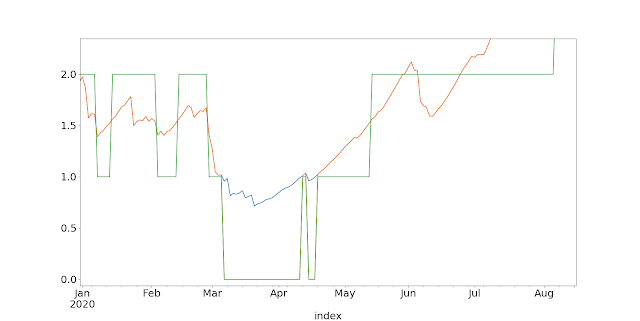 I've zoomed in to the end of this plot, which shows positions for Eurodollar at various stages. The blue line shows what position we'd have on without position rounding, and with a fixed capital weight of 6.25% (equal weight across 16 instruments) multiplied by the IDM (2.5 here). The orange line - which is mostly on the blue line - shows the position we'd have on without rounding, once we've applied the 'You need to have one of the 16 strongest forecasts to come to the party' rule (I need a catchier name).
So for example between March and mid April this goes to zero, as the forecast weakens.
Finally the green line shows the rounded position, once I've applied my usual buffering rule. You can see that's mostly a rounded version of the orange line. 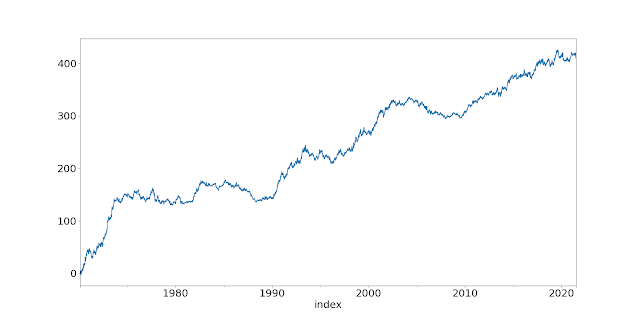 OK. It's not great, although the last 10 years is pretty good. Also the vol targeting is somewhat poor: 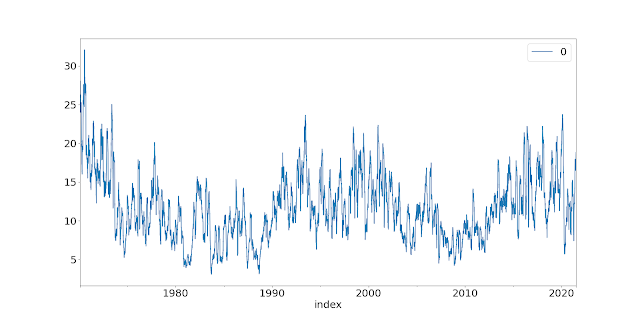 Let's turn our attention first to the poor performance. Some of that is due to costs; which go up from around 10bp of SR in the large and reduced benchmarks, to 26bp of SR. As I've said many times before, pre-cost performance is (to an extent) random but costs are predictable. Not a surprise when a forecast going from being ranked 16th best to 15th best will result in a trade; and then possibly the next day the same position being closed.

AB "It seems unfair to kick someone out of the party, just because they've gone from being your 15th to 16th favourite friend. Maybe you should let kids stay until they are really not your friends anymore."

OK, let's try it. I propose the following rule (bear in mind that my forecasts are scaled such that a forecast of +10 is an average long):
So:
That improves things a little; the cost comes down to 20SR units. But that's still a lot - about double what it is in the benchmark cases.
Let's restrict our universe of instruments we can consider adding to forecasts over 10, rather than over 5. Then we have:
This creates a 'no trade zone' for forecasts between 5 and 10.
.... and makes almost no difference; lowering the costs by 1 SR unit.
Clearly I could play with these boundaries until I got a nicer result, but this reeks of implicit fitting and I feel the gap is just too large.

Some other things we could try

There are more complicated things we could do here, for example considering diversification when adding potential instrument positions, allocating the risk bucket by asset class or instrument cluster, perhaps a more sophisticated approach to costs.... but I think we'll just end up in the bad old world of complex dynamic optimisation that I narrowly escaped from in the second post.

I feel this particular dead horse has been flogged enough. There is no easy way to get around the problem of having insufficient capital to trade loads and loads of futures markets. Any kind of dynamic optimisation, eithier by simple ranking (this post), or complex formula (posts 1 and 2) just isn't very effective, and involves making the nice simple straightforward trading system very ugly indeed.
By far the simplest approach is to sensibly choose some subset of those markets, and use those as your static set of instruments as I did in post #3 of this series. This also happens to be the best performing option in a backtest. For the $500K of capital that I have the effect on performance is fairly minimal in any case.
Yes there will FOMO if an instrument I don't own shows a seriously good trend, but I will just have to live with that.
Things are clearly tougher if you only have $100K or less, but then as my third book points out maybe you should be trading other leveraged instruments.
My personal 'to do' list now consists of tactically reweighting my portfolio towards the 28 instruments I found to be optimal for my account size here, and putting into place the technology to allow regular (annual?) reviews of my set of instruments.
Thanks for your help Auntie B.

AB "You're welcome. And I hope for your sake that the Jacuzzi is still warm."