I've just added the ability to estimate forecast scalars to pysystemtrade. So rather than a fixed scalar specified in the config you can let the code estimate a time series of what the scalar should be.

If you don't understand what the heck a forecast scalar is, then you might want to read my book (chapter 7). If you haven't bought it, then you might as well know that the scalar is used to modify a trading rule's forecast so that it has the correct average absolute value, normally 10.

Here are some of my thoughts on the estimation of forecast scalars, with a quick demo of how it's done in the code. I'll be using this "pre-baked system" as our starting point:

The code I use for plots etc in this post is in this file.

Even if you're not using my code it's probably worth reading this post as it gives you some idea of the real "craft" of creating trading systems, and some of the issues you have to consider.


The basic idea is that we're going to take the natural, raw, forecast from a trading rule variation and look at it's absolute value. We're then going to take an average of that value. Finally we work out the scalar that would give us the desired average (usually 10).

Neither approach is "right" but you should be aware of the difference (or better still avoid using biased forecasts).


Use a median, not a mean


From above: "We're then going to take an average of that value..."

Now when I say average I could mean the mean. Or the median. (Or the mode but that's just silly). I prefer the median, because it's more robust to having occasional outlier values for forecasts (normally for a forecast normalised by standard deviation, when we get a really low figure for the normalisation).

The default function I've coded up uses a rolling median (syscore.algos.forecast_scalar_pooled). Feel free to write your own and use that instead:


In chapter 7 of my book I state that good forecasts should be consistent across multiple instruments, by using normalisation techniques so that a forecast of +20 means the same thing (strong buy) for both S&P500 and Eurodollar.

One implication of this is that the forecast scalar should also be identical for all instruments. And one implication of that is that we can pool data across multiple markets to measure the right scalar. This is what the code defaults to doing.

Of course to do that we should be confident that the forecast scalar ought to be the same for all markets. This should be true for a fast trend following rule like this:

Close enough to pool, I would say. For something like carry you might get a slightly different result even when the rule is properly scaled; it's a slower signal so instruments with short history will (plus some instruments just persistently have more carry than others - that's why the rule works).

The odd one's out are V2X (with a very low scalar) and Eurostoxx (very high) - both have only a year and a half of data - not really enough to be sure of the scalar value.

One more important thing, the default function takes a cross sectional median of absolute values first, and then takes a time series average of that. The reason I do it that way round, rather than time series first, is otherwise when new instruments move into the average they'll make the scalar estimate jump horribly.

Finally if you're some kind of weirdo (who has stupidly designed an instrument specific trading rule), then this is how you'd estimate everything individually:


Use an expanding window


As well as being consistent across instruments, good forecasts should be consistent over time. Sure it's likely that forecasts can remain low for several months, or even a couple of years if they're slower trading rules, but a forecast scalar shouldn't average +10 in the 1980's, +20 in the 1990's, and +5 in the 2000's.

For this reason I don't advocate using a moving window to average out my estimate of average forecast values; better to use all the data we have with an expanding window.

For example, here's my estimate of the scalar for a slow trend following rule, using a moving window of one year. Notice the natural peaks and troughs as we get periods with strong trends (like 2008, 2011 and 2015), and periods without them. 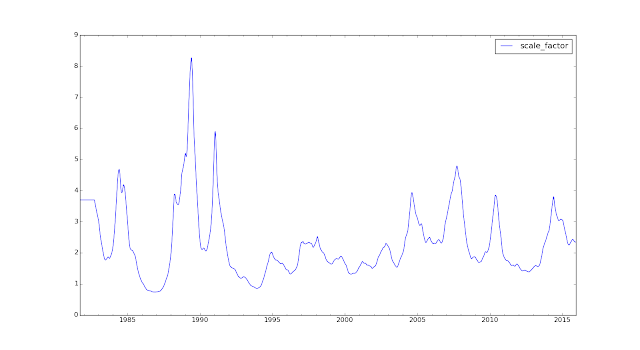 There's certainly no evidence that we should be using a varying scalar for different decades (though things are a little crazier in the early part of the data, perhaps because we have fewer markets contributing). The shorter estimate just adds noise, and will be a source of additional trading in our system.

If you insist on using a moving window, here's how:

## By default we use an expanding window by making this parameter *large* eg 1000 years of daily data
## Here's how I'd use a four year window (4 years * 250 business days)
system.config.forecast_scalar_estimate.window=1000


Goldilocks amount of minimum data - not too much, not too little


The average value of a forecast will vary over the "cycle" of the forecast. This also means that estimating the average absolute value over a short period may well give you the wrong answer.

For example suppose you're using a very slow trend following signal looking for 6 month trends, and you use just a month of data to find the initial estimate of your scalar. You might be in a period of a really strong trend, and get an unrealistically high value for the average absolute forecast, and thus a scalar that is biased downwards.

Check out this, the raw forecast for a very slow trend system on Eurodollars: 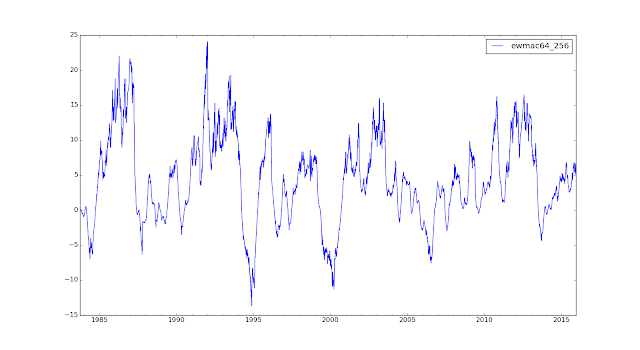 Notice how for the first year or so there is a very weak signal. If I'm now crazy enough to use a 50 day minimum, and fit without pooling, we get the following estimate for the forecast scalar: 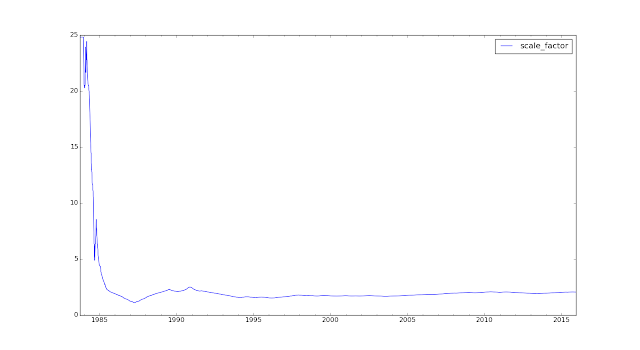 Not nice. The weak signal has translated into a massive overestimate of the scalar.

On the other hand, using a very long minimum window means we'll eithier have to burn a lot of data, or effectively be fitting in sample for much of the time (depending on whether we backfill - see next section).

The default is two years, which feels about right to me, but you can easily change it, eg to one year:

## use a year (250 trading days)
system.config.forecast_scalar_estimate.min_periods=250


So if we're using 2 years of minimum data, then what do we do if we have less than 2 years? It isn't so bad if we're pooling, since we can use another instrument's data before we get our own, but what if this is the first instrument we're trading. Do we really want to burn our first two years of precious data?

I think it's okay to cheat here, and backfill the first valid value of a forecast scalar. We're not optimising for maximum performance here, so this doesn't feel like a forward looking backtest.

Just be aware that if you're using a really long minimum window then you're effectively fitting in sample during the period that is backfilled.

Naturally if you disagree, you can always change the parameter:


Perhaps the most interesting thing about this post is how careful and thoughtful we have to be about something as mundane as estimating a forecast scalar.

And if you think this is bad, some of the issues I've discussed here were the subject of debates lasting for years when I worked for AHL!

But being a successful systematic trader is mostly about getting a series of mundane things right. It's not usually about discovering some secret trading rule that nobody else has thought of. If you can do that, great, but you'll also need to ensure all the boring stuff is right as well.