Why I don't like short end German bonds any more

Its a cardinal sin if you meddle with a systematic futures trading system. So I hope the patron Saint of Traders will forgive me.

Low vol means more leverage, and hence exposure to a Swiss Franc type episode. It feels to me like an asset with negative skew with a serious peso problem. It also means higher volatility adjusted trading costs.

Secondly there isn't much upside. German 2 year interest rates are minus 18bp! Yes you read that correctly, there is a minus sign.* 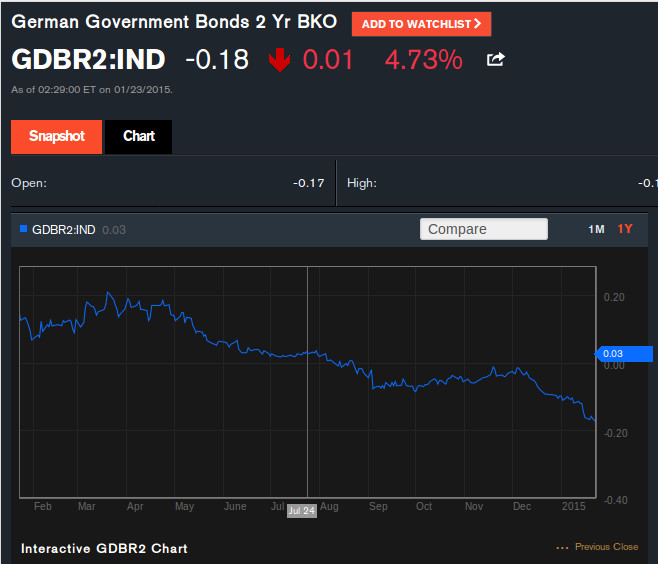 With thanks and apologies for screen grabbing from Bloomberg

* There is a subtle difference between the benchmark yield and the effective yield on the Cheapest to Deliver bond on the future, but lets not worry about that today - its Friday.

I'm extremely uncomfortable trading bonds when interest rates are negative or close to it. As systematic traders we rely on the future being like the past. There aren't enough periods of negative rates in the past to make me confident that my back-tested models will work.

This isn't just a case of turning off all developed world interest rate trading models in a post 2011 ZIRP / QE enviroment. Its a problem that's specific to Germany (and Japan, Switzerland and Denmark; but I don't trade bond or STIR futures there).

Contrast the Shatz to the US two year future. US two year yields are a reasonably healthy 50bp and volatility is around three times what it is on the Shatz.

I have no hard and fast rules about where the threshold is between 'models work' and 'models not working'. For now at least I'm going to keep trading the German 5 year Bobl future. Although five year rates are around zero the volatility is a slightly more sane 35bp, so my exposure to a black swan event is more limited. If the 5 year rate goes below minus 10bp, or the volatility drops below 25bp (about 1 point a year in price terms), then the Bobl will be joining the Shatz in Room 101.

Anyway I'll be reallocating my risk to both the 5 year and 10 year (Bund) futures.

I don't trade 20 year Buxl as the risk is too chunky for my modest book.


Of course QE will probably push prices up further (although it might be a case of buy the rumor, sell the fact?), but I'll participate in the upside. It strikes me that the yield curve is unlikely to move parallel on the QE move. In Japan we saw curves flattening as rates approached zero, with yields out to a few years hitting zero and then a 'hockey stick' shape developing further out. So there should be more upside further out on the curve.

(I also hold Italian and French government futures, which will probably benefit)

This is all over thinking things somewhat, and I'd like to emphasise that this isn't a 'trade', I'm just trying to support what is for me at least a controversial decision.

Whenever you make an intervention like this you should set some 'exit conditions. So if the Shatz volatility rises above 30bp and the yield above 25bp, then I'll be back in.

I won't be selling out immediately, but I've started gradually reducing. I expect to be out well before when I would normally be ready to roll into the June 2015 futures. Hopefully there won't be a blow up before then!